Today we will present a BioRxiv preprint which has an indirect but interesting link to neurodegenerescence.

By using wavelet transform analysis Sánchez-Moguel et al report that the elderly with excess in theta activity show a higher energy in delta, theta, and alpha bands during the categorization of stimuli in a counting Stroop task. 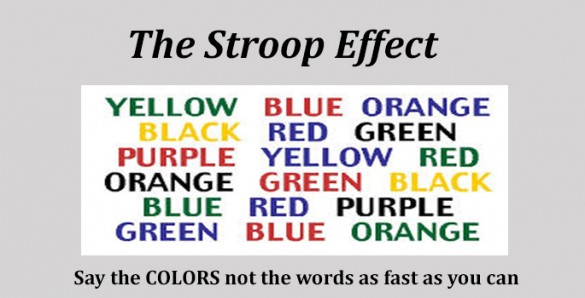 Their findings imply that this increase neuronal activity might be related to a dysregulated energy metabolism in the elderly with theta excess that could explain the progress to cognitive impairment in this group.

The wavelet analysis allows them to have a standard frequency decomposition of EEG signals over time. So it can help to know the amount of energy used during the execution of Stroop tasks.

Healthy aging is accompanied by a natural detriment of physical and cognitive abilities. In particular, inhibitory control and attention are affected. The general objective of this study was to explore, using Wavelet transform, if there were differences in the amount of energy during the performance of a counting Stroop task between a group of elderly with an excess of theta activity in their EEG and a group of elderly with normal EEG. The specific objective was to evaluate the amount of energy between EEG groups for each of the frequency bands (i.e., delta, theta, alpha, beta, and gamma) across different time windows.

The researchers expected to find higher energy in the group with theta excess, specifically in the time window associated with categorization of stimuli. Changes in brain electrical activity, which can be measured noninvasively by the EEG, are tightly related to cognitive processes. Some authors have proposed that changes in the EEG of the elderly, obtained under resting conditions, are not only the result of normal aging but can contain signs of undergoing subclinical pathologic processe.

Moreover, excess in delta and theta band frequencies of resting EEG from healthy elderly, compared to a normative base according to age, is an excellent predictor of cognitive detriment in the following seven years.

Stroop tasks have been used during functional magnetic resonance imaging (fMRI) to study the decrease in the efficiency of inhibitory processing during healthy and pathological aging. In the counting Stroop task, subjects are asked to answer how many words are presented in a slide, regardless of the meaning of the word itself. Subjects increase their response times and tend to make more mistakes when the meaning of the word does not match the number of times that the word appears; this phenomenon is known as the Stroop or interference effect.

An over-recruitment of neuronal activity during aging was observed using fMRI during the execution of Stroop tasks; this enhanced neuronal activity is proposed to have a compensatory function. Furthermore, fMRI studies showed higher brain activity in older people with mild cognitive impairment compared to healthy elderly.

The main advantage of wavelet analysis over Fourier analysis is that they can follow the brain frequency dynamics over time.

The researchers propose that this excessive energy expenditure in the Theta-EEG group is due because more neurons are recruited in order to perform the task with the same efficiency as the Normal-EEG group. However, they do not know if this energy expenditure is due to cellular and metabolic imbalances that promote progress to cognitive impairment.

Imaging techniques such as fMRI, diffusion tensor imaging, and magnetic resonance spectroscopy, that evaluate the neural networks involved in the task and metabolic expenditure, would complement the findings of the article authors.

Lead author of this study, Dr Shefeeq Theparambil (UCL Neuroscience, Physiology & Pharmacology) said: “The human brain consumes an immense amount of energy, the rate of which is estimated to be equal to human leg muscles running a marathon. Such a high metabolic rate produces a significant amount of acid, but until now, it had not been entirely clear how the brain protects itself from harmful acidification.

Bicarbonate, in conjunction with water, hydrogen ions, and carbon dioxide, forms a buffering system, to provide resistance to pH changes in both the acidic and basic directions. This is especially important for protecting tissues of the central nervous system, where pH changes too far outside of the normal range in either direction could prove disastrous.

Nervous system involvement may be seen with acidosis. Signs and symptoms that may be seen in acidosis include headaches, confusion, feeling tired, tremors, sleepiness, flapping tremor, and dysfunction of the cerebrum of the brain which may progress to coma if there is no intervention.

By studying live mice and brain cell samples, the researchers were able to identify the mechanism by which astrocytes maintain pH balance in active areas of the brain. They found that at least one third of astrocytes in the mouse brain release bicarbonate that counteracts the acidity of the protons released by neuronal cells. The bicarbonate release corresponds to local activity levels in the brain, as the mechanism continually responds to changes in brain activity in order to maintain balance and support the activity of nerve cells processing information.

Therefore maintaining stability of brain tissue pH necessitates an effective mechanism capable of supplying bicarbonate to the extracellular space in a responsive mode, i.e., in a neuronal activity-dependent manner. 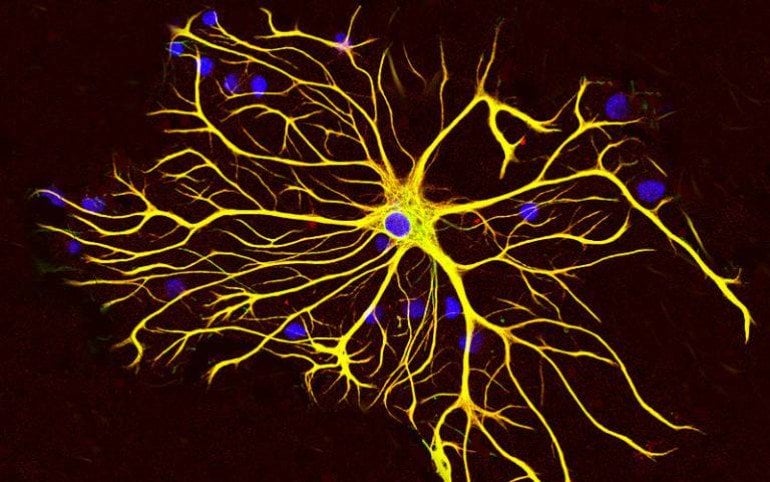 Astrocytes monitor local brain activity by sensing neuronal signalling molecules (such as glutamate and ATP) that escape from the synaptic cleft.

Sodium bicarbonate cotransporters (NBCs) mediate the coupled movement of sodium and bicarbonate ions across the plasma membrane of many cells. In brain, NBCe1 is predominantly expressed by astrocytes.

The scientists hypothesised that, in astrocytes, the recruitment of one (or several) of these intracellular mechanisms in response to neuronal signalling molecules can stimulate outward activity of NBCe1 and thus supply bicarbonate to the extracellular space ‘on demand’, and in accord with the level of local neuronal activity.

The results obtained in this study suggest that bicarbonate transport in astrocytes of the forebrain is controlled by purinergic signalling. ATP and downstream purines facilitate bicarbonate release by astrocytes via activation of NBCe1. This astroglial mechanism appears to play an important role in the control of local brain extracellular pH.


This book retraces the main achievements of ALS research over the last 30 years, presents the drugs under clinical trial, as well as ongoing research on future treatments likely to be able stop the disease in a few years and to provide a complete cure in a decade or two.

Hepatitis E virus may be associated with neurodegenerative...

Neurodegenerative diseases are often sometimes to a virus, in particular...

END_OF_DOCUMENT_TOKEN_TO_BE_REPLACED

This is another study about oxytocin role in autism. It reflects a view of...

END_OF_DOCUMENT_TOKEN_TO_BE_REPLACED

Biogen stops working on BIIB100, one of its three...

Biogen is discontinuing BIIB100 (an XPO1 inhibitor) as one of its three...

END_OF_DOCUMENT_TOKEN_TO_BE_REPLACED

Contrary to appearances, there is some links in this post with...

END_OF_DOCUMENT_TOKEN_TO_BE_REPLACED

Quality of life was better with CNM-Au8 than with placebo...

END_OF_DOCUMENT_TOKEN_TO_BE_REPLACED

What's in a name? Is Flail leg syndrome a variant of ALS or another...

END_OF_DOCUMENT_TOKEN_TO_BE_REPLACED

Annual Trends in the Incidence and Prevalence of...

Despite recent studies suggesting a declining incidence and prevalence of...

END_OF_DOCUMENT_TOKEN_TO_BE_REPLACED

While amyotrophic lateral sclerosis is widely recognised as a...

END_OF_DOCUMENT_TOKEN_TO_BE_REPLACED

Bosutinib may stop the progression for some ALS patients

Modeling neurodegenerative diseases is difficult because of poor access to...

END_OF_DOCUMENT_TOKEN_TO_BE_REPLACED

Reduced incidence of dementia after vaccination against...

There is growing interest in the possibility that Alzheimer's disease is...

END_OF_DOCUMENT_TOKEN_TO_BE_REPLACED

An amyotrophic lateral sclerosis hot spot in the French...

ALS does not have a single cause, on the contrary every case of ALS is...

END_OF_DOCUMENT_TOKEN_TO_BE_REPLACED

Development of an α-synuclein knockdown peptide and...

END_OF_DOCUMENT_TOKEN_TO_BE_REPLACED

The effects of trazodone on human cognition: a systematic...

Here is an example of systematic review about an anti-depressant which has...

END_OF_DOCUMENT_TOKEN_TO_BE_REPLACED

The Risk of Alzheimer's Disease After Acute...

It is well known that approximately 10% cognitively healthy patients...

END_OF_DOCUMENT_TOKEN_TO_BE_REPLACED

A new article by Qaisar, Qayum and Muhammad made me think about links...

END_OF_DOCUMENT_TOKEN_TO_BE_REPLACED

It’s unknown why misfolded aggregates appear in cells cytosol during...

END_OF_DOCUMENT_TOKEN_TO_BE_REPLACED

In most of the organs of our body, the lymphatic system is responsible for...